Shihan (師範) is a Japanese term, often used in Japanese martial arts as an honorific title for expert or senior instructors.
Shihan in Komyo Reiki Kai is a teacher, a person who, while teaching,  continues to learn something from his students.  The Reiki teacher does not teach the student how to live; on the contrary, he helps him learn how to choose and then, the student has to undertake the path towards spiritual enlightenment himself. 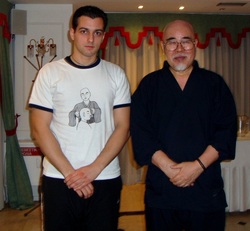 Sensei with Komyo Reiki Shihan Constantinos Nteriotis
How did Reiki came to your Life?
Reiki came to me by Divine Guidance. I read books describing Reiki experiences but I never believed in those. I was in a bookstore when I saw a poster about a Reiki festival. I saw this poster many times. Many other signs guided me to go to the festival. I went and stayed all day long. There were several Reiki Teachers with different Reiki Styles. I spoke with many Reiki teachers and practitioners.

One teacher was so different from all the others- Argy Barlama, a Komyo Reiki Shihan (Teacher) who spoke about the Japanese Reiki. I tried to meet and speak with her, but it was impossible. Months later the Divine Guidance took me to her house. I was accepted as a student. We had many things in common, like ideas for life and spritualism. Because of that we became good friends. 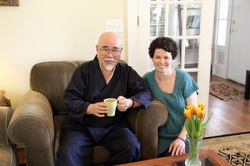 Inamoto Sensei with Shihan Dana Lisa Young
How did Reiki came to your life?
I experienced energy healing while on a business trip to India that had a very profound effect on me physically and spiritually. Physically, it completely relieved the neck and back pain I was experiencing at the time, but spiritually, it connected me with the vast potential of the infinite. I had a moment, hours after my brief encounter with the person who did the healing, where I was just dumbstruck with amazement.

When I returned to the U.S., I began seeking out teachers who taught the style of energy healing I received in India. There was no one immediately available anywhere near me, but during my search, I came across a mention of Reiki. I had practiced Japanese Zen meditation for years, so this immediately piqued my interest. The concepts and practice of Reiki deeply resonated with me in a way that was similar to the first time I sat zazen. I felt like I was home. Learning Reiki changed my life.

When and how did you meet Inamoto Sensei?
I met Sensei in NYC in 2010. Lilia Marquez connected with me via Facebook earlier that year, and mentioned that she was hosting her teacher, who taught Japanese-style Reiki. I checked out the link she sent me, and realized he was the same person whose translations of Reiki texts I had been reading and sharing with my students! I was very excited, since I was already learning about Japanese-style Reiki on my own. Having the opportunity to study with Sensei was the next natural step on my path.

I was waiting to sign in at the registration table at the META Center in NYC when Sensei walked into the room. I felt him first before I even saw him. The energy of his presence was warm and beautiful - like having a ray of sun touch your shoulder on a cloudy day. I knew I was in the right place and with the right teacher for me.

What do like about Komyo Reiki?
I appreciate that Komyo Reiki is a simple, elegant system that emphasizes a personal path to healing and absolute inner peace without being rigid or dogmatic. The system, while remaining true to its roots, also reflects the spiritual understanding Sensei has gained from his years as a Buddhist monk. He teaches the system of Reiki without denigrating or denying anyone if their path differs from his.

The heart of the practice is compassion, and its expression is in the gentle way we are encouraged to practice with discipline and openness, but without insistence on a prescriptive approach. I have grown so much since learning Komyo Reiki, and I love teaching the system and practicing along with my students. I am so grateful to Sensei for sharing this practice with us, and to Lilia for introducing me to him. 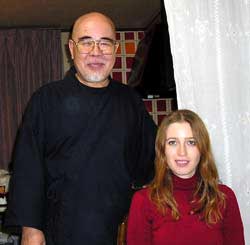 Inamoto Sensei with Komyo Reiki Shihan Chiara Grandi
How did Reiki came to your life?
My family doctor said I would have had to take pain killers for the rest of my life in order to reduce the pain in my arm which I could barely move. I was also told by the otorhinolaryngologist that I would have to be operated for the second time. The pain killers didn't succeed in eliminating the pain in my arm.

One day, a friend of mine who is fond of martial arts and alternative sciences said to me: "I've got second level Reiki; I can heal the pain in your arm." "Well, let's try!" I said whatever that Reiki was. Basically, my friend puts his hands on my sore arm and a short while later, the pain was gone. Two days later, my arm started hurting again. I asked my friend to try Reiki one more time. The pain completely disappeared. "Wow!" I said, "Not even the strongest pain killers can do as much. But, what is this Reiki? "it's a Japanese healing technique which balances a person's energies through the laying on if hands, " my friend answered. "How can I learn this technique?" "Can I do it to myself?" "Yes, sure!" I had always been skeptical about this kind of thing. I didn't  believe in anything that could not be seen or touched. All the same, I wanted to get well so I looked for a Reiki teacher Read more:  http://www.chiaragrandi.it/en/reiki_free_book.htm


When and how did you meet Inamoto Sensei?
I put together all my savings and went to meet Takashi and Misato, the two Japanese friends I had met in England and the USA.  With my Japanese friend's help and after some searching, I found a Reiki Teacher in Kyoto. He was a Buddhist monk with a lineage closed to the Reiki Founder, Mikao Usui: Rev.Hyakuten Inamoto.
First of all, he corrected me saying that he is not a Reiki "master" but a Reiki Teacher, as a teacher is a person who while teaching, continues to learn something from his students.  The Reiki teacher does not teach the student to live; on the contrary he helps him to learn how to choose and then the student has to undertake the path towards spiritual enlightenment by himself.

What do you like about Komyo Reiki?
It is important to keep clearly in mind that Komyo Reiki is different from the rest of Reiki techniques. The basic difference is that it focuses on self-abandon to the Universal Energy during the treatment.  Komyo Reiki teaches you to follow your intuition.

When I began to practice Reiki, I couldn't imagine that this discipline would have changed my life. Thanks to its simplicity and quickness, I could appreciate from the beginning its beneficent effects. The 'efficiency of this technique pushed me to go to Japan to research Reiki origins, and here I found a Teacher and a way to take: the Rev. Inamoto Hyakuten and his Komyo Reiki.

When I came back to Italy I could see how much Komyo Reiki was appreciated for its purity and its strenght, and I realized that it wasn't right to keep it only for myself. I wanted to give to everyone the possibility to receive this discipline in its original form, but above all I tried to keep exactly the same message and the teaching that my Teacher, Rev. Inamoto, had given to me in Japan.